toggle search form
News   PLAYBILL ARCHIVES: 110 in the Shade — 1963
By Ernio Hernandez
(This is one in a series of Playbill.com features offering a periodic look back at Broadway and Playbill history, timed to accompany a new production or event of a show from theatre's past. A Broadway revival of 110 in the Shade, starring Audra McDonald, opens May 9 at Studio 54. Here's a glimpse at the 1963 Playbill of the original production, with some perspective on the period.)

Martin Luther King, Jr. delivered his "I Have A Dream" speech just two months ago. Coca-Cola makes its first diet drink, TaB. "Petticoat Junction" and "The Judy Garland Show" premiered on CBS. The Los Angeles Dodgers just swept the New York Yankees in the World Series. And the radio plays "Blue Velvet," "Be My Baby" and "Sugar Shack." A first-class postage stamp costs 5¢. You're back in 1963.

On Broadway, the Arthur Kopit play Oh Dad, Poor Dad, Mama's Hung You in the Closet and I'm Feeling so Sad (with newcomer Sam Waterston) opens the season (and has already closed). Albert Finney makes his Broadway debut in John Osborne's Luther. The second-to-last week in October sees the opening of three shows in three days (all prepositionally titled) with A Rainy Day in Newark, (Oct. 22), Barefoot in the Park (Oct. 23) and 110 in the Shade (Oct. 24). 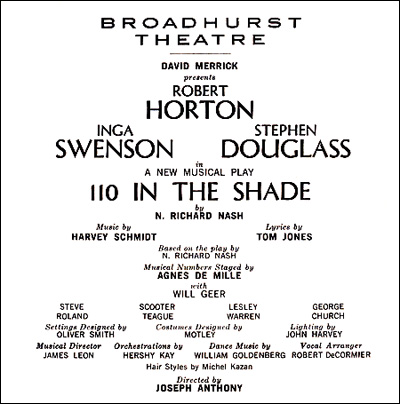 The title page in the 110 in the Shade Playbill.

The new musical — featuring a score by the authors of The Fantasticks (Harvey Schmidt and Tom Jones) and based on the N. Richard Nash play The Rainmaker — opens at the Broadhurst Theatre. Joseph Anthony directs a cast that features Robert Horton, Inga Swenson, Stephen Douglass and Will Geer. Agnes De Mille provides musical staging. 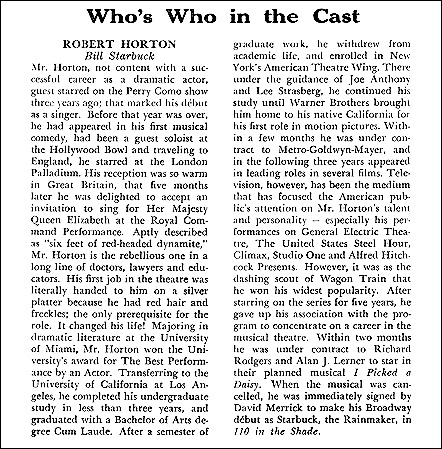 Robert Horton's bio in the "Who's Who."

In the Playbill, among advertisements for cars ("the classic profile [now] three inches longer" of Lincoln's Continental or "the strictly big car" ride of the new Chevrolet Chevelle), colognes, perfumes, travel by air (Pan Am, TWA or Iberia Air Lines) or sea (Cunard or American Export Lines), Tony Bennett and Pat Cooper gigs at Copacabana, cigarettes and plenty of alcohol, are full-page spreads for original cast albums of Oliver! (on RCA Victor) and Here's Love (on Columbia Records). 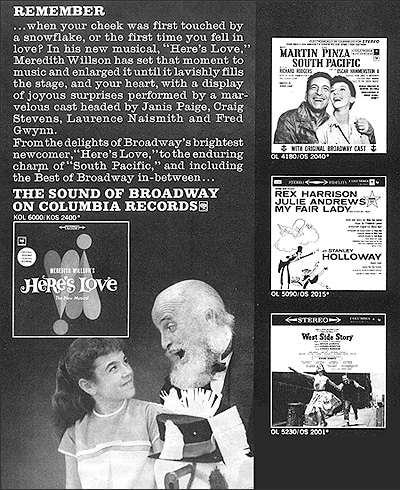 An ad for the Here's Love recording. 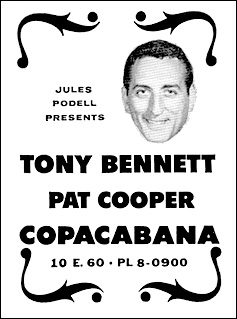 An announcement for Tony Bennett at Copacabana.

Editorial featured in the Playbill include a "Who Gets Billed Over Who and Who Cares?" focus on the battle for top billing by Irving Drutman; a Stuart W. Little-penned "Theatretalk" column about the new agreement between Actors' Equity and British Equity that sets up a reciprocal exchange between the stage unions; and George Church's return to the stage after a 25-year absence (due to enlisting in the Army and a back injury sustained from a roofing job) as well as the signature "Who's Who in the Cast."

Theatre historian and Playbill archivist Louis Botto recalled a rather ribald tale he heard about the pre-Broadway run of 110 in the Shade in Boston. Noël Coward was up in Boston with his show Sail Away, and he went to see [110] and he came back and the cast asked him what he thought of the show. And he replied, "Robert Horton had such tight pants on that it looked like he had a cocktail shaker in there."

Though actors Will Geer and Inga Swenson, composer and lyricist Schmidt and Jones, and director Anthony all received Tony Award nominations for their work on 110 in the Shade, the musical was overshadowed by another David Merrick-produced show: Jerry Herman's Hello, Dolly! starring Carol Channing under the direction of Gower Champion. (She Loves Me star Jack Cassidy beat out Geer.) The musical was revived in 1992 by the New York City Opera (director Scott Ellis and choreographer Susan Stroman) starring Karen Ziemba. A studio cast — featuring Ziemba and Kristin Chenoweth — recorded the full score in 1999.