PLAYBILL ARCHIVES: A Day in the Death of Joe Egg — 1968 | Playbill
toggle menu

toggle search form
Featured Shows
Related Articles
The Archives PLAYBILL ARCHIVES: A Day in the Death of Joe Egg — 1968 (This is one in a series of Playbill On-Line features offering a periodic look back at Broadway and Playbill history, timed to accompany a new production or event of a show from theatre's past. A Broadway revival of A Day in the Death of Joe Egg starring Eddie Izzard and Victoria Hamilton opens April 3 at the American Airlines Theatre. Here's a glimpse at the 1968 Playbill of the original production, with some perspective on the period.)
By Ernio Hernandez

It is a year in which the United States was involved with a war that many protested against. Later in the year, president Lyndon Baines Johnson would announce he was not seeking reelection and both Martin Luther King, Jr. and Senator Robert F. Kennedy would be assassinated. On the television, a news program called "60 Minutes" would begin airing. It is 1968.

On Broadway, Judy Garland, Marlene Dietrich, Eddie Fisher and Buddy Hackett all play special engagements while musicals like Elmer Bernstein and Carolyn Leigh's How Now, Dow Jones and Jules Styne, Betty Comden and Adolph Green's Hallelujah, Baby! sing on the stage with the Off-Broadway musical Hair directed by Joe Papp on its way to the boards. Britain sends Tom Stoppard's Rosencrantz and Guildenstern Are Dead as well as a Michael Blakemore helmed production of a Peter Nichols drama about a couple dealing with their handicapped child. 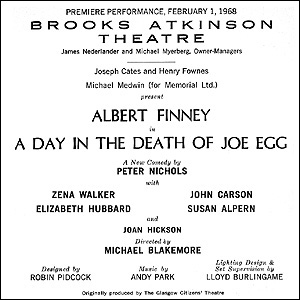 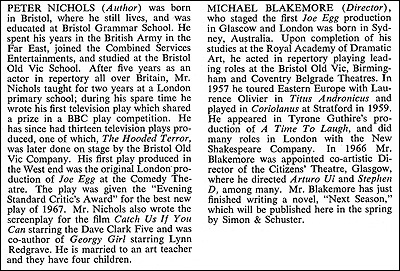 Broadway newbies Peter Nichols' and Michael Blakemore's "Who's Who."

In the Playbill, among advertisements for cars (the Cadillac Fleetwood 75 Limousine with "a host of Cadillac refinements, such as concealed windshield wipers" and the "smooth, sure torsion-bar ride" of Chrysler's Imperial Crown), perfumes, cosmetics, cigarettes and plenty of alcohol, are full-pagers for original cast recordings of How Now, Dow Jones as well as nine Columbia Records releases ï¿1/2 "available on 4 track and 8-track stereo tape catridges." 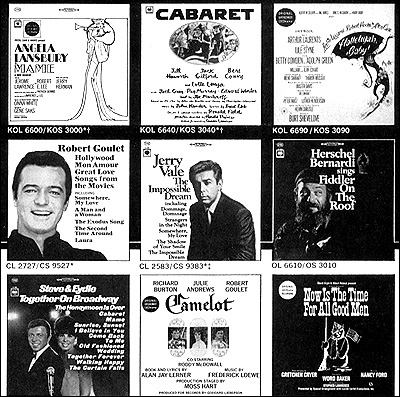 Part of an ad for several Columbia Records albums.

Editorial featured in the Playbill inculde a feature called "How to Win an Award" on actors and the many awards ("Tony, Oscar, Emmy and Obie"); a Leonard Lyons-penned article about esteemed British actresses in "There Is Nothing Like a Dame"; Playbill's dining guide and a "Theatre Scene" focus on Anna Sosenko's Seven Arts Collectors Gallery which boasts many theatrical momentos. 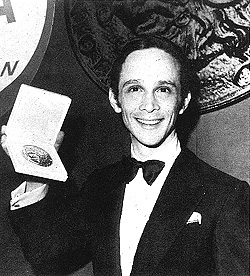 Actor Joel Gray and his Tony Award in the feature "How To Win An Award."

The show, which oft went by its abbreviated moniker Joe Egg, would garner director Blakemore his first of many Tony Award nominations ï¿1/2 culminating in a double win in 2000 for both musical (Kiss Me, Kate) and play (Copenhagen). The Tony Awards would also recognize British playwright Peter Nichols for his Broadway debut and actor Albert Finney with nominations. The only Joe Egg consorter to actually take home the award would be actress Zena Walker ï¿1/2 a fate shared by actress Stockard Channing who played the same role in the 1985 revival. The latter production also featured Jim Dale, Joanna Gleason and John Tillinger ï¿1/2 who performed the role he understudied in the original production. Joe Egg would finally receive its glory with the 1985 Tony Award for Best Revival (the award was dubbed Reproduction at the time).