toggle search form
Featured Shows
Related Articles
The Archives PLAYBILL ARCHIVES: Big River — 1985 (This is one in a series of Playbill On-Line features offering a periodic look back at Broadway and Playbill history, timed to accompany a new production or event of a show from theatre's past. A Broadway revival of Big River starring Dan Jenkins, Ty Giordano and Michael McElroy opens July 24 at the American Airlines Theatre. Here's a glimpse at the 1985 Playbill of the original production, with some perspective on the period.)

Ronald Reagan was sworn in for his second term as President of the United States earlier in the year. Mikhail Gorbachev just took office in the U.S.S.R. Coca-Cola introduces "New" Coke. Madonna launches her first concert tour, "The Virgin Tour." The cost of a stamp is 20¢. The year is 1985.

Lining the Broadway boards are the continuing productions of A Chorus Line, Cats, 42nd Street and Sunday in the Park With George as well as new shows like Hurlyburly and Biloxi Blues — the follow-up to Neil Simon's still-running Brighton Beach Memoirs. Off-Broadway, the "monster musical hit" Little Shop of Horrors still plays. 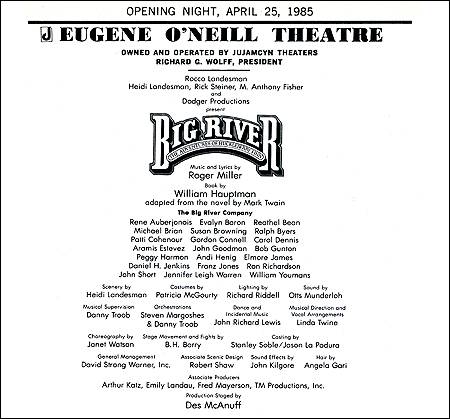 The title page in the Big River Playbill. Closing out the season musical-wise is a new adaptation of Mark Twain's novel "The Adventures of Huckleberry Finn" by composer-lyricist Roger Miller and librettist William Hauptman. Big River opened April 25 at the Eugene O'Neill Theatre with a cast that including Rene Auberjonois, John Goodman, Ron Richardson and Broadway newcomer Daniel H. Jenkins as directed by Des McAnuff.

John Goodman and Broadway newbie Daniel H. Jenkin's "Who's Who."

Inside the Playbill, among advertisements for cars (the "luxury and precise road management" of the Oldsmobile Ninety-Eight Regency and "the eye-seducing sweep of the classic body lines" on the Chevrolet Monte Carlo), airlines, furs, perfumes, cosmetics, cigarettes and plenty of alcohol, is a production photo of the show's stars Richardson and Jenkins.

A scene with Ron Richardson (left) and Daniel H. Jenkins from Big River.

Editorial features in the Playbill include a focus on 50-year-old Broadway gypsy David Evans who dances in La Cage aux Folles, an article about The Leader of the Pack, a "Theatregoer's Notebook" on the cancer-recovering Yul Brynner in The King and I and Jim Dale in the current revival of Joe Egg, as well as a "Passing Stages" feature — penned by Playbill editor Louis Botto — which includes a mini-quiz boasting the likeness between Helen Hayes in Victoria Regina and her mimic Bert Lahr in Two on the Aisle. 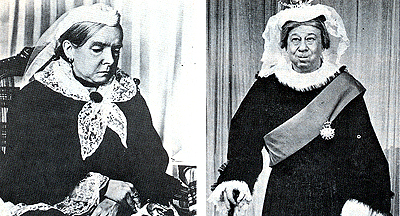 Helen Hayes (left) and Bert Lahr in a Playbill feature.

According to Playbill Radio program director Robert Viagas, the musical was not expected to do well. "The word on the street (prior to opening anyway) was that Big River was going to flop messily. After all, how could you possibly make a musical of the sprawling novel 'Huckleberry Finn,' something generations of schoolkids had been forced to read?" Once the show opened, however, Viagas noted the show received plenty of "positive buzz" for the chemistry between Huck and Jim. "And don't forget that this was the show that launched the career of John Goodman, who stopped the show with his profane 'Guv'ment' as Pap Finn in Act I."