toggle search form
Featured Shows
Related Articles
The Archives PLAYBILL ARCHIVES: Glengarry Glen Ross — 1984 (This is one in a series of Playbill.com features offering a periodic look back at Broadway and Playbill history, timed to accompany a new production or event of a show from theatre's past. A Broadway revival of Glengarry Glen Ross starring Alan Alda, Liev Schreiber and Jeffrey Tambor opens May 1 at the Royale Theatre. Here's a glimpse at the 1984 Playbill of the original production, with some perspective on the period.)

President Ronald Reagan recently appointed the first official U.S. ambassador to Pope John Paul II's Vatican after an 1867 law which prohibited diplomatic exchange due to the separation of Church and State was overturned. The new movie "Police Academy" beats out "Splash," "Footloose" and "Against All Odds" at the box office. Cyndi Lauper tops the singles charts with "Girls Just Want To Have Fun" and the cost of a first class postage stamp is 20¢. Welcome back to 1984. The year on Broadway kicked off with Mike Nichols directing Glenn Close and Jeremy Irons in The Real Thing, Ian McKellen starring in his solo Acting Shakespeare and Chita Rivera and Liza Minnelli hoofing it up in John Kander, Fred Ebb and Terrence McNally's new musical The Rink. Meanwhile, earlier season shows like The Glass Menagerie with Jessica Tandy and La Cage aux Folles with George Hearn and Gene Barry continue. Stage legend Ethel Merman passed away. Al Pacino just ended his run in a revival of David Mamet's American Buffalo when a new work by the author comes to town. 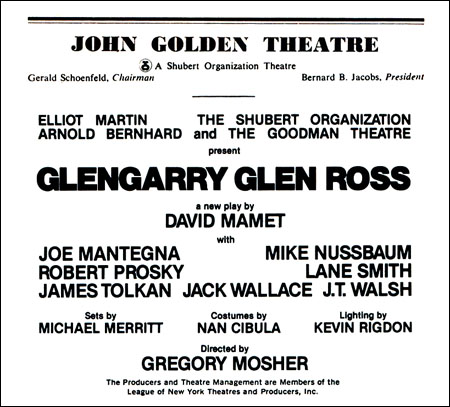 The title page in the Glengarry Glen Ross Playbill. 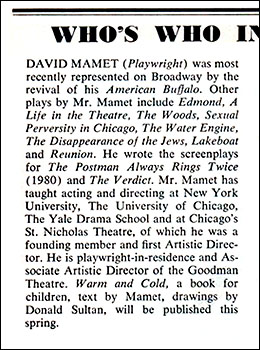 David Mamet's bio in the "Who's Who."

In the centennial edition of the Playbill, which celebrates the magazine's 100 anniversary of service to the theatre, among advertisements for cars (Oldsmobile's Ninety-Eight Regency with "new electronic auto calculator/trip computer" or Ford's FILA edition Thunderbird), airlines, Lauren Bacall pawning Fortunoff, perfumes, the "credit card size stereo radio" by Toshiba, cigarettes and plenty of alcohol is a proclamation from New York City mayor Edward Koch, declaring April 6-13 as "Playbill Week." 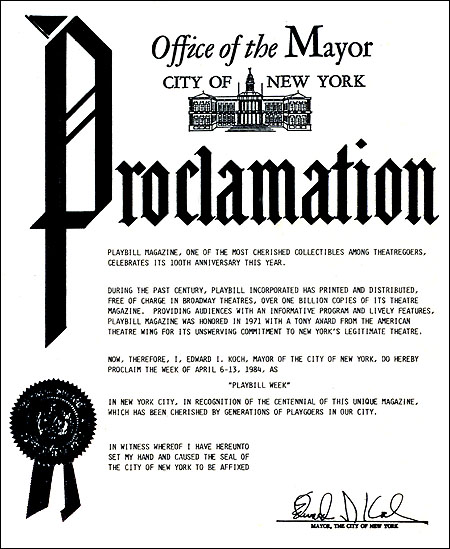 Editorial featured in the more than 130-page special Playbill includes a "Playbill Today" article casting a look back at the company's first century, a "1884-1984... Adding It Up" focus on advertisements featured in the programs, a theatre personalities quote-heavy "Memories" piece (featuring words from Helen Hayes, Harold Prince, Stella Adler, Glenn Close, Jerome Robbins, Joseph Papp and more), the signature "Who's Who in the Cast" and "Dear Playbill" as well as "Scenes From" the show. 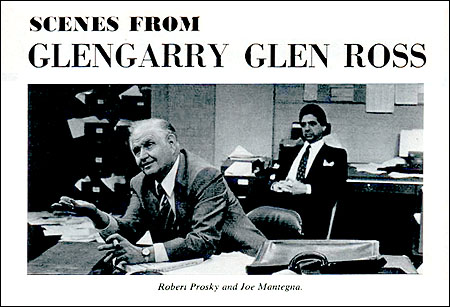 According to theatre writer and Playbill radio program director Robert Viagas, Mamet's title — which is the name of two real estate developments within the play — threw theatregoers for a spin. "Nobody could figure out what the title meant. There was all kinds of speculation in the weeks leading up to the first public performance — and even after, since not everyone picked up on the reference in the play." Audiences certainly picked up on the frank language, though. "People were stunned by all the cursing. In 1984, this still had the power to shock."

The play would not win the Tony Award, being bested by Tom Stoppard's The Real Thing, but would go on to earn the year's Pulitzer Prize for Drama. Director Mosher with actors Prosky and Mantegna would be nominated for Tony Awards — Mantegna would win in the Featured Actor category. Mamet would adapt his play for the 1992 film which would star Al Pacino, Jack Lemmon, Alan Arkin, Ed Harris, Kevin Spacey, Jonathan Pryce and Alec Baldwin — the latter in a role not featured in the play.