toggle search form
Featured Shows
Related Articles
The Archives PLAYBILL ARCHIVES: Sweeney Todd — 1979 (This is one in a series of Playbill.com features offering a periodic look back at Broadway and Playbill history, timed to accompany a new production or event of a show from theatre's past. A Broadway revival of Sweeney Todd starring Michael Cerveris and Patti LuPone opens Nov. 3 at the Eugene O'Neill Theatre. Here's a glimpse at the 1979 Playbill of the original production, with some perspective on the period.)

Long-running shows A Chorus Line, Oh! Calcutta! and Grease continue as Ernest Thompson's drama about a late-in-life couple, On Golden Pond, just opened on the boards of Broadway. Rex Harrison stars in The Kingfisher, Joel Grey in The Grand Tour and Tovah Feldshuh in Saravà when a dark new musical about The Demon Barber of Fleet Street takes the stage. 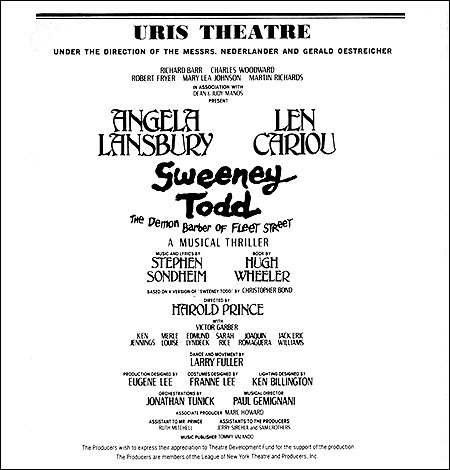 The title page in the Sweeney Todd Playbill.

Angela Lansbury and Len Cariou star in Stephen Sondheim's Sweeney Todd which opens March 1 at the Uris Theatre. Harold Prince directs the tale about a barber returns home to exact revenge and the pie-maker who profits from his killings. Victor Garber, Ken Jennings and Merle Louise are also featured in the ensemble of more than two dozen.

Stephen Sondheim's bio in the "Who's Who."

In the Playbill, among advertisements for new cars (Datsun's new ZX with "Aircraft style Backlit instrument Panel Gauges" or the Buick Riviera ), fashion, Sanka coffee, airlines, Western Union's Mailgrams, restaurants, cigarettes and plenty of alcohol is an author's note about the many incarnations of the Sweeney Todd story. 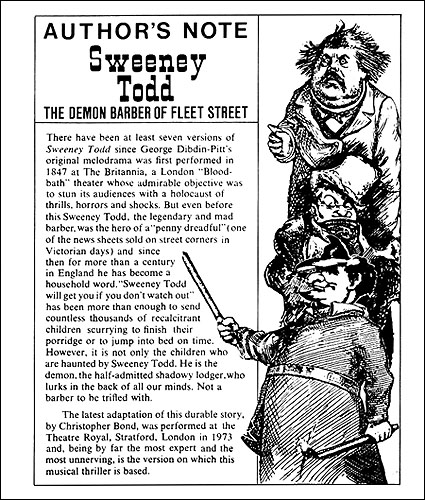 The Author's Note for Sweeney Todd.

Editorial featured in the Playbill include a "Zoot Suit" focus on the first Hispanic American play to come to Broadway, a Michael Musto-penned "Celebrity Pets" article about stage stars and their odd companions, the signature "Theatre Quiz" and "Who's Who in the Cast," a quote-heavy "Theatre Talk" feature and a photo "Anniversaries" feature with theatre personalities celebrating various occasions. 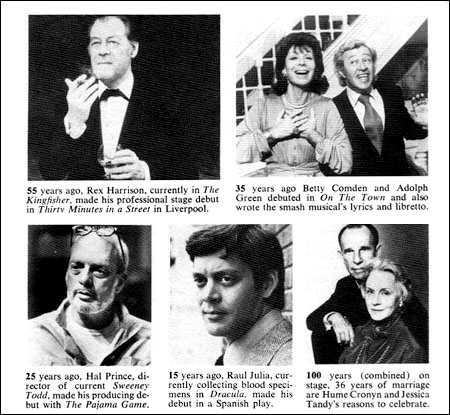 Part of the "Anniversaries" feature.

The mellifluous voices of its stars weren't the only memorable sounds in the production. "An effect like the piercing factory whistle in the opening scene really startled the preview audience," recalled Playbill Broadway Yearbook editor Robert Viagas. "So many people know the show well now and expect it. But in those early first previews, it really made the audience's hair stand on end." Bookending the aural impact for Playbill.com "Opening Night" columnist Harry Haun was "the violent door slam that ended the show," who recalls that moment as one of his favorites "that still resonates within me." Other memories include "how Angela resembled a cartoon cat, how fiercely demented Len Cariou was, how beautifully Victor Garber sang the heartbreakingly delicate 'Joanna' and the way it soared so gorgeously when Sweeney is about to slit the throat of the judge."

Sweeney Todd earned Tony Awards for both its leading stars Lansbury and Carious as well as designers Eugene and Franne Lee, director Prince and took home the honors for Best Book, Score and Musical. The production with Lansbury and Cariou replacement George Hearn was later filmed during its national tour in 1982 and aired on television — which would earn three Emmy Awards (including one for Hearn).