toggle search form
Featured Shows
Related Articles
The Archives PLAYBILL ARCHIVES: The Glass Menagerie — 1945 (This is one in a series of Playbill.com features offering a periodic look back at Broadway and Playbill history, timed to accompany a new production or event of a show from theatre's past. A Broadway revival of The Glass Menagerie starring Jessica Lange opens March 22 at the Barrymore Theatre. Here's a glimpse at the 1945 Playbill of the original production, with some perspective on the period.)

On The Great White Way, Oklahoma! marks its second year on Broadway while Celeste Holm stars in the new musical Bloomer Girl, Jackie Gleason stars in last season's Follow the Girls and a young actor named Marlon Brando makes his Broadway debut in I Remember Mama. Mary Chase's Harvey and the first work by a new playwright Arthur Miller (The Man Who Had All The Luck) open before another young scribe comes to town. 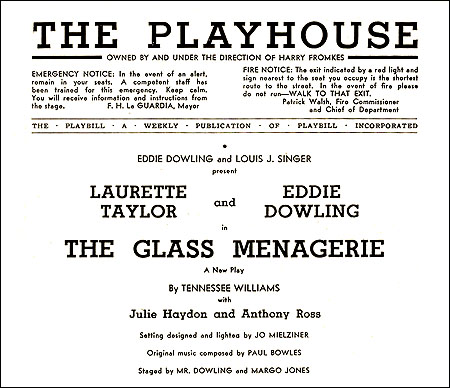 The title page in the The Glass Menagerie Playbill. Tennessee Williams gets his Broadway debut after enduring a flop in Boston with his first full-length play, Battle of Angels, and a subsequent stint as a contract MGM scriptwriter where he submitted the work called "The Gentleman Caller." That piece evolved into The Glass Menagerie which opens on Broadway March 31 at the Playhouse Theatre with Laurette Taylor as the mother of a sheltered daughter (played by Julie Haydon) and her gentleman caller (Anthony Ross). Eddie Dowling plays the son and stages the work with Margo Jones and also produces with Louis J. Singer.

Tennessee William's bio from the "Who's Who."

In the Playbill, there are advertisements for Pepto Bismol ("When your stomach Acts Up!"), Heinz ketchup ("takes the lead in giving snacks the zest they need!"), perfumes, women's fashions, cigarettes and plenty of alcohol displayed among a notice from the Mayor Fiorello H. LaGuardia's office warning ticketbuyers who purchase seats not through the box office.

Editorial featured in the Playbill is limited to the signature "Who's Who," a Playhouse Theatre seating chart and the current show list of "New York's Leading Theatres and Attractions" due to a government restriction on the consumption of paper. Audience members were also urged to "share your copy of The Playbill with your companion."

According to theatre historian and Playbill archivist Louis Botto, the work was launched to success from it's out-of-town tryout at Illinois' Civic Theatre. "It opened in Chicago and nobody was going and then main critic there, Claudia Cassidy, kept raving about it and it became a hit." Cassidy's contemporary Ashton Stevens also posted positive notices for his publication and soon the work was selling out.

Two weeks after its New York opening, The Glass Menagerie earned Williams the New York Drama Critics Circle Award for the Best American Play of the 1944-45 season. (The Tony Awards would not come into being until 1947.) The Williams play would later be filmed for a 1950 movie starring Gertrude Lawrence, Jane Wyman, Kirk Douglas and Arthur Kennedy. The play not given a chance by Hollywood would see another 1987 film release, two television adaptations and trod the Broadway boards five more times in the last five decades.