PLAYBILL ARCHIVES: The Phantom of the Opera — 1988 | Playbill
toggle menu

The United States and Canada just reached an agreement on free trade while on the other side of the globe Australia celebrates its bicentennial. "Good Morning Vietnam," "Three Men and a Baby" and "Moonstruck" top the box office at the movies while Michael Jackson's "The Way You Make Me Feel," INXS' "I Need You Tonight" and Tiffany's "Could've Been" top the music charts. In less than a week, "The Wonder Years" will debut on ABC. A first class stamp costs 22¢. This leap year is 1988.

On the Great White Way, A Chorus Line currently boasts the title of "Longest Running Show in Broadway History." That show plays among last season's Best Musical Tony Award winner Les Misérables as well as Cats, Bernadette Peters in Into The Woods, Joel Grey in a revival of Cabaret and Anything Goes starring Patti LuPone and Howard McGillin. The new year's first musical, after a successful year in London's West End, hops the pond to its New York counterpart. 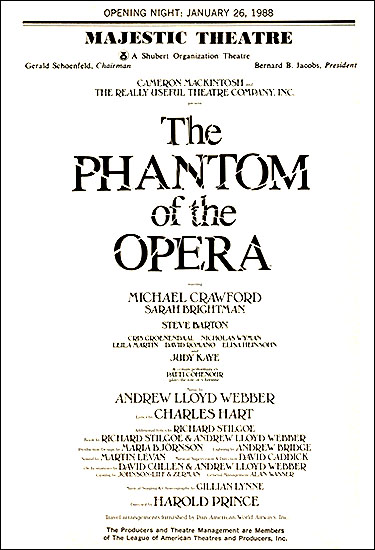 The title page in the The Phantom of the Opera Playbill.

Andrew Lloyd Webber's The Phantom of the Opera, with its original London stars Michael Crawford and Sarah Brightman, now haunts the recesses of the newly landmarked Majestic Theatre. The musical tale of an operahouse ghost and his young chorus girl prodigy takes the stage for a Jan. 26 opening night under the direction of Harold Prince. Also in the cast are Steve Barton, Patti Cohenour, Judy Kaye and a young chorus girl named Rebecca Luker making her Broadway debut. 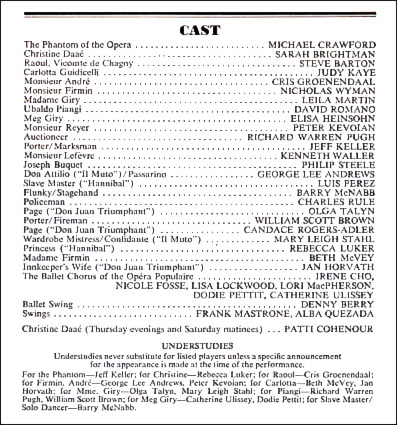 The cast list on opening night of The Phantom of the Opera.

"It was tremendously exciting, I remember it almost reaching the absurd level. Everyone wanted a ticket," the now-seasoned stage star Luker told Playbill.com about her "first big job." She recalled, "We'd be walking down the street in our Phantom show jackets and people would yell out from cabs at you 'Can you get me a seat?!'" The fresh face who "just graduated from college" landed the understudy for the role of Christine while Patti Cohenour would be Brightman's alternate (at certain performances). (Luker would eventually take over the role the following year.)

Rebecca Luker's bio in the "Who's Who."

In the Playbill, among advertisements for cars (BMW's "Ultimate Tanning Machine", the 325i Convertible or Oldsmobile's Toronado Troféo with "dual tail pipes"), jewelry, cosmetics, airlines ("The only nonstops to Honolulu from Newark" of Continental and "The Official Airline" of Walt Disney World, Delta), furs, Rolex "Day-Date® and Lady Datejust®" watches, local restaurants, cigarettes and plenty of alcohol are full-pagers for the cast album of The Phantom of the Opera (available on album, cassette or compact disc) and the upcoming "My Funny Valentine" salute to Richard Rodgers. 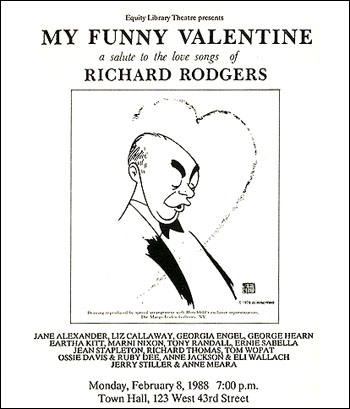 An portion of an ad for the My Funny Valentine concert.

Editorial featured in the Playbill include the signature "Dear Playbill" and "Who's Who in the Cast," a Louis Botto-penned "Passing Stages" about current Broadway shows, a focus on the 40th anniversary of the New York City Ballet and a photo-feature on with production shots from the show in "Scenes From The Phantom of the Opera." 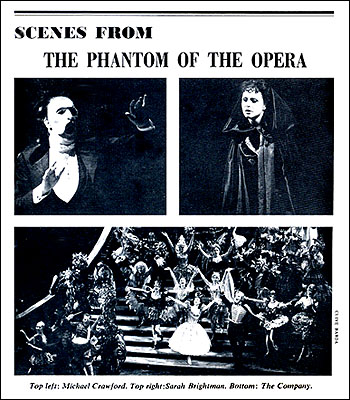 According to "The Phenomenal Phantom" feature in the Playbill, the show had reached more than $14 million in advance sales ("a new Broadway record") and also sold a record-breaking 19, 028 tickets in the first day the box office opened. Luker concurred with the madness for the new show. "Opening night, I was in almost the back row, being in the chorus, and the theatrical paparazzi rushed the stage after the curtain call. It was just a huge mass of flashbulbs and yelling. It remained that way for some time."

The Phantom of the Opera would garner Tony Award wins for stars Michael Crawford (Actor in a Musical) and Judy Kaye (Featured Actress in a Musical), director Harold Prince, designer Maria Björnson (in both scenic and costume categories), lighting designer Andrew Bridge and the top prize for Best Musical. The musical will at last be adapted for the big screen in 2004 — starring Gerard Butler, Emmy Rossum, Patrick Wilson, Miranda Richardson and Minnie Driver — at the hands of director Joel Schumacher who pens the screenplay with composer Andrew Lloyd Webber.

On Jan. 9, 2006 Phantom makes another mark in the theatre annals as the longest-running show in Broadway history, surpassing A Chorus Line (at 6,137 performances), Les Misérables (6,680) and finally another Webber musical Cats (7,485).