The original version of Grease was rowdier and grittier than what is performed today in theatres. "There is a cosy aggressiveness to the show," wrote Clive Barnes in his New York Times review, "a deliberately loud-mouthed and facetious tastelessness that some will find attractive, especially, I imagine, those who were teenagers in Middle America at the end of the 1950s."

The production received seven Tony Award nominations, including one for Best Musical, and went on to play 3,388 performances, a record at the time. Notable replacements during the show's eight-year run included Peter Gallagher, Patrick Swayze, John Travolta, Judy Kaye and Richard Gere.

Grease returned to Broadway in a 1994 revival starring Ricky Paull Goldin and Susan Wood and again in a 2007 revival with Max Crumm and Laura Osnes.

Read a Playbill from the original 1972 production of Grease in the Vault. 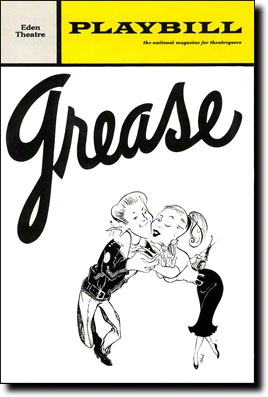