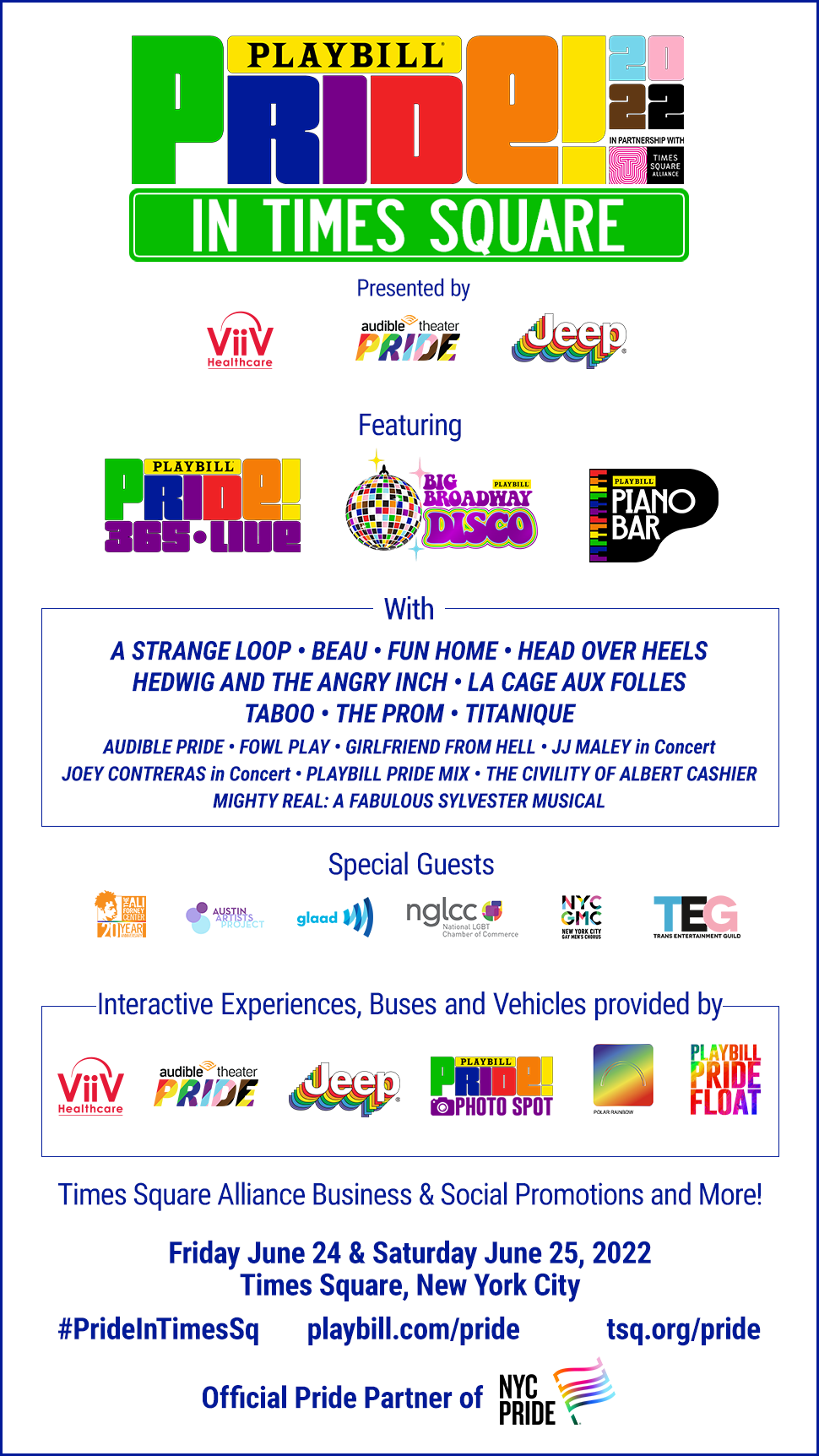 Presented by Playbill and Times Square Alliance, Pride in Times Square is a weekend of FREE LGBTQIA+ events, panels, concerts and surprises taking place on Friday June 24 and Saturday June 25, 2022, in Times Square. Event timing and performers will be announced at a later date and subject to change. The event takes place rain or shine!

Pride in Times Square is made possible thanks to our sponsors: ViiV, Audible, and Jeep.

(see below for more details) 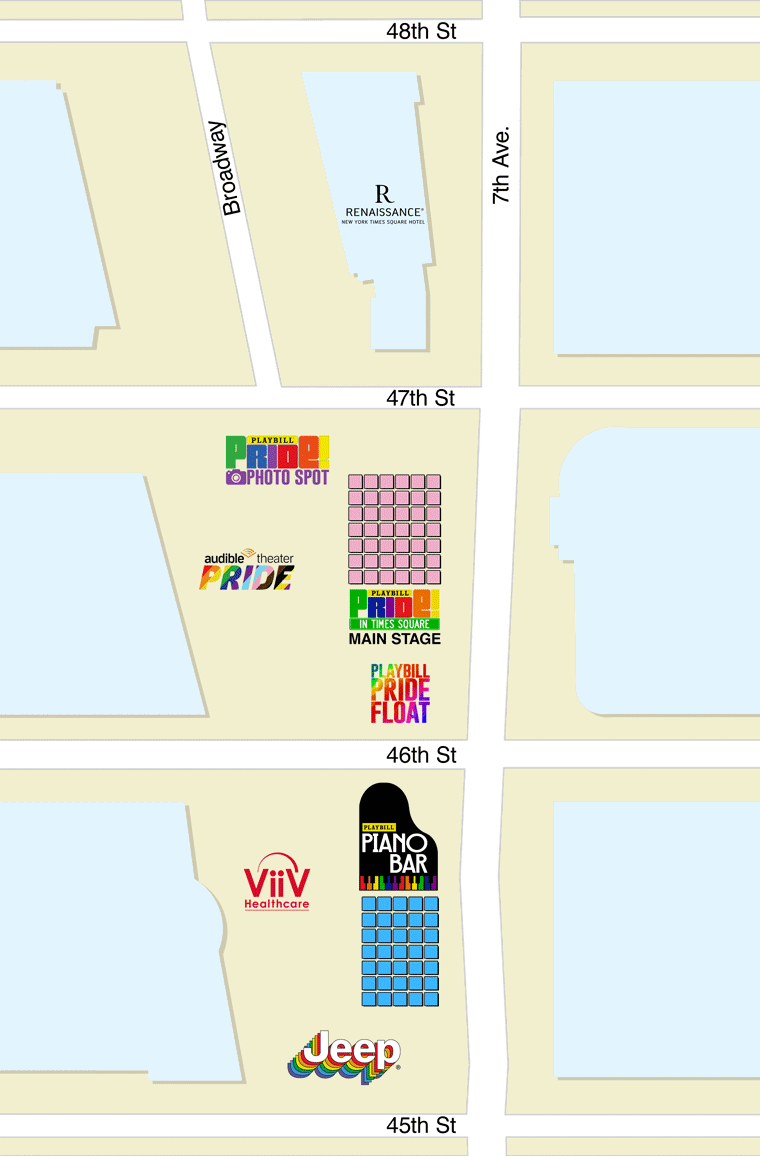 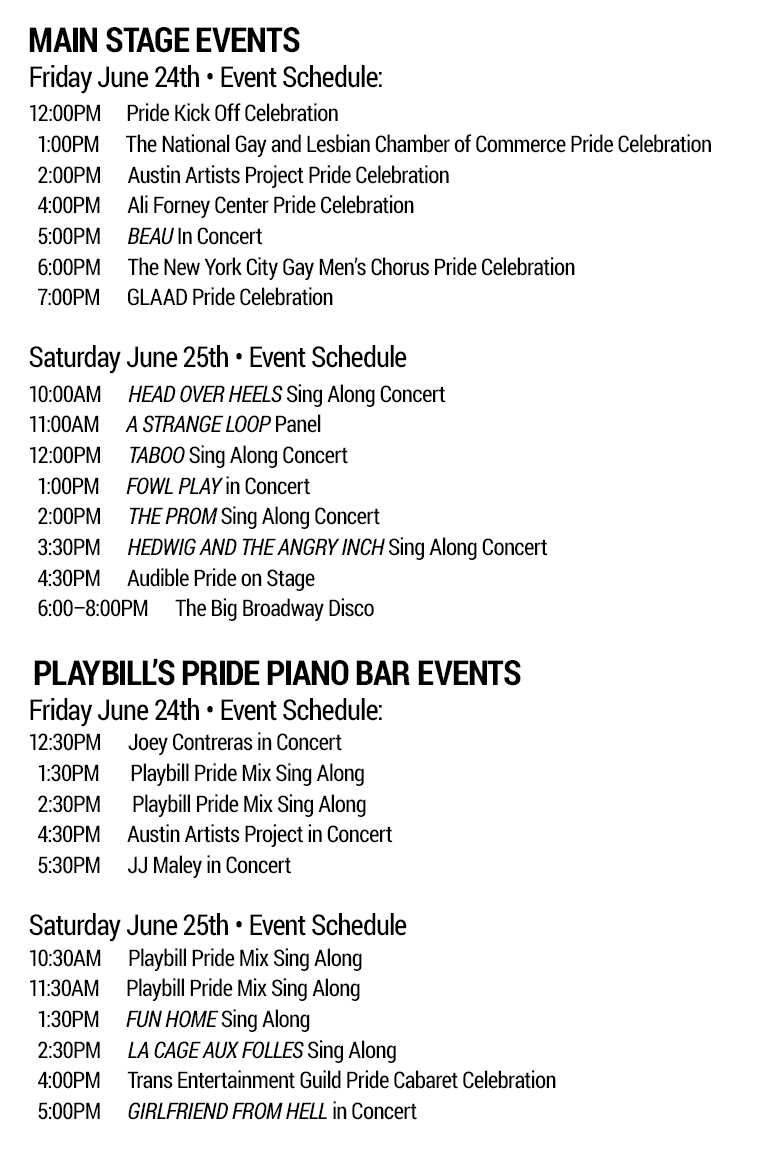 12:00PM - PRIDE IN TIMES SQUARE KICK-OFF
Join Playbill, Times Square Alliance, and leaders from Broadway and LGBTQIA+ Organizations as they kick off Pride in Times Square!

4:00PM - ALI FORNEY CENTER – PRIDE CELEBRATION
Join Marti Gould Cummings and AFC’s President/Executive Director Alexander Roque, as they celebrate Pride and share in AFC mission is to protect LGBTQ+ youths from the harms of homelessness and empower them with the tools needed to live independently. For more information on AFC: aliforneycenter.org

7:00PM - GLAAD – PRIDE CELEBRATION
Join singer/songwriter Neil Davis Scibelli and GLAAD Representatives Sarah Kennedy and Jose Useche as they celebrate rewriting the script for LGBTQ acceptance! GLAAD is proud to tackle tough issues and shape the narrative and provoke dialogue that leads to cultural change. As they work to protect all that has been accomplished and create a world where everyone can live the life they love, hear more as they take the stage!

2:00PM - THE PROM: Pride Sing-Along Concert
Join original cast members Caitlin Kinnunen, Gabi Campo and Isabella McCalla as they bring a sing along of THE PROM to the heart of Broadway: Times Square! Pianist Brandon James Gwinn and the cast members are set, ready: It’s Time to Dance!

3:30PM - HEDWIG AND THE ANGRY INCH: Pride Sing-Along Concert
HEDWIG AND THE ANGRY INCH is the landmark musical by John Cameron Mitchell and Stephen Trask that is “groundbreaking and undoubtedly ahead of its time” (Entertainment Weekly). This genre-bending, fourth-wall-smashing musical sensation, with a pulsing score and electrifying performances, tells the story of one of the most unique characters to ever hit the stage. Winner of four 2014 Tony Awards® including Best Musical Revival, HEDWIG AND THE ANGRY INCH comes to Times Square with Mason Alexander Park, Stephen Trask, Sean Liliquist, Justin Craig and Andres Valbuena ready to ROCK The Stage!

4:30PM - AUDIBLE PRIDE CELEBRATION
Presented by Audible, join stage and screen star Shakina Nayfack, her band and special guests as they celebrate Pride with selections from Shakina’s award-winning solo show MANIFEST PUSSY, and discussion of the groundbreaking CHONBURI INTERNATIONAL HOTEL & BUTTERFLY CLUB. Audible proudly continues the tradition of partnering with Pride and elevating voices that deserve to be heard. This celebration is sure to be remembered and celebrated!

10:30AM & 11:30AM - PLAYBILL PRIDE MIX Piano Sing-Along
Join pianist Brandon James Gwinn at the Sing for Hope piano for a pride-filled sing along of Broadway showtunes that celebrate all-things PRIDE!

1:30PM - FUN HOME: Piano Sing-Along
Join pianist Drew Wutke at the Sing for Hope piano for a sing along of one of the most groundbreaking productions ever to hit Broadway: FUN HOME. Winner of five 2015 Tony Awards including Best Musical and based on Alison Bechdel's best-selling graphic memoir, sing along to favorites including “Ring of Keys”, “Come To The Fun Home”, “Days and Days” and celebrate all-things FUN HOME!

2:30PM - LA CAGE AUX FOLLES: Piano Sing-Along
Join pianist Drew Wutke at the Sing for Hope for a LA CAGE AUX FOLLES Sing Along! Based on the French play of the same name, the musical by Harvey Fierstein and Jerry Herman tells of a flamboyant gay couple who must pretend to be straight for one night and the madness that ensues. With classic songs like “I Am What I Am”, “Song on the Sand”, and more, get swept away in this Tony-Award winning, pride-filled musical.

5:00PM - GIRLFRIEND FROM HELL in Concert
GIRLFRIEND FROM HELL: THE MUSICAL is a hilarious homage to the "best/worst" 80's movies, and a wild night that you won't soon forget. After being pushed over the edge by the most popular kids at school, four-eyed wallflower, Maggie Miller, cries to the heavens for help. But it is Satan who hears her cry, and transforms her into a big-haired, high-heeled, foul mouthed, sex bomb rocker who's hungry for revenge! These hilarious musical beams pride and positivity, with a touch of Satan’s sass! Participants include Tara Martinez and Giuliana DePietro, with book/music writer Sean Matthew Whiteford, and director Rachel Klein, as well as Lena Gabrielle on piano and Mark Garthwait on guitar.