There's a Parade in Town: A Preview of the Fall London Theatre Season

toggle search form
News   There's a Parade in Town: A Preview of the Fall London Theatre Season
By Robert Simonson
Actors will not go hungry this fall in London. I don't mean there will be plenty of gainful employment for thespians, though there is plenty of that. I mean that England's leading players (and a few American compatriots) will not lack for meaty parts in which to sink their scenery-chewing teeth.

It's hard to say who will enjoy the more sumptuous feast. It may be Jonathan Pryce, who will play the desperate real-estate salesmen Shelly Levene in a new West End version of David Mamet's Glengarry Glen Ross, which will begin previews at London's Apollo Theatre Sept. 27. James MacDonald directs. (Pryce had considerably less to gnaw on in the 1992 film version, in which he played the small role of a potential gull.)

Or the biggest meal may belong to Christian Slater, who will portray a different kind of predator in Swimming With Sharks, a stage adaptation of the Hollywood comedy thriller about a horribly abusive film producer named Buddy Ackerson and his long-suffering assistant. Helen Baxendale and Matt Smith join Slater in the London world premiere at the West End's Vaudeville Theatre beginning Oct. 5.

A gentler, but no less satisfying role will be played by veteran Charles Dance in a West End revival of William Nicholson's play Shadowlands, which opens at the Wyndham's Theatre on Oct. 8 following previews from Oct. 3. Dance and Janie Dee will fill the roles of author C.S. Lewis and New York divorcee Joy Davidman, who conduct a late-in-life romance. 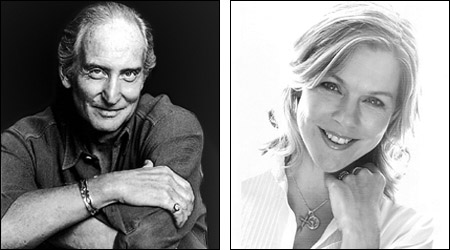 Of course, women get hungry, too, and two actresses, one Yankee and one British, are currently scarfing up a lot of attention. Stockard Channing anchors a new production of Odets' Awake and Sing! as Jewish matriarch Bessie at London's Almeida Theatre. The Almeida Theatre revival is helmed by its artistic director, Michael Attenborough, and officially opened Sept. 6. Meanwhile, at the Old Vic, Diana Rigg is tearing up the stage in All About My Mother, the world premiere stage version of Pedro Almodóvar's All About My Mother. She plays Huma Rojo, an aging lesbian actress touring in a production of A Streetcar Named Desire in this tale of the strength of various women in dire situations. It is thought the show will find its way to Broadway.

Also well nourished will be the entire cast of the upcoming revival of Caryl Churchill's Cloud Nine, which begins at London's Almeida Theatre Oct. 25. Helmed by Equus director Thea Sharrock, the play—one of Churchill's most famous--will feature James Fleet, Mark Letheren, Tobias Menzies, Bo Poraj, Joanna Scanlan, Sophie Stanton and Nicola Walker. Big roles a-plenty are also to be had courtesy of the Bard. (Shakespeare is good for that sort of thing.) Chiwetel Ejiofor will be Othello, and Ewan McGregor will be Iago in a new production of the Venetian tragedy directed at the Donmar Warehouse by Michael Grandage, beginning Nov. 29. And, the fall season at London's Royal National Theatre will include a production of Shakespeare's Much Ado About Nothing, directed by Nicholas Hytner and starring Simon Russell Beale and Zöe Wanamaker, as a somewhat more mature Beatrice and Benedick. The run begins Dec. 10.

Coming a bit before it at the National, on Sept. 25, will be a new look at Noel Coward's Present Laughter, starring Alex Jennings as egotistical, romantic actor Garry Essendine. Davies has previously worked on Coward's Private Lives in the West End and on Broadway. Other attractions at the National include Nick Stafford's adaptation of War Horse, a story about a war, a boy and a horse. It is co-directed by Marianne Elliott and Tom Morris (who developed the National's adaptation of Coram Boy) in their first directorial collaboration, and presented in association with the South African-based Handspring Puppet Company. It plays the Olivier. The production is part of the National's continued dedication to creating work for young audiences.

Also at the National is the world premiere of Statement of Regret, a new play by Kwame Kwei-Armah, which will commence previews on the Cottesloe stage Nov. 7. The work concerns the founder of a Black policy think tank, who spirals into self-destruction after his father dies. Other London attractions this fall include: a musical stage version of the film Desperately Seeking Susan, set to the hits of post-punk pop group Blondie, at the Novello Theatre starting Oct. 12.; the U.K. premiere of John Patrick Shanley's Doubt at the Tricycle Theatre beginning Nov. 19; the world premiere of Sebastian Barry's latest play, The Pride of Parnell Street, also at the Tricyle; and a new production of Jason Robert Brown and Alfred Uhry's Tony-winning musical Parade, which opens at the Donmar Sept. 24 following previews that began Sept. 14.

This last production — arguably the centerpiece of the Donmar season — marks the directorial debut of American choreographer Rob Ashford, who was responsible for the dancing in the recent West End revivals of Guys and Dolls and Evita, both directed by Donmar artistic director Michael Grandage. Parade is based on the true story of Leo Frank, a Jewish factory owner falsely convicted of murdering a girl in Atlanta in 1913. The London cast sees Bertie Carvel make his musical debut as Leo, and Lara Pulver (a London Brown vet, don't you know — she starred in the Menier Chocolate Factory production of The Last Five Years), as Leo's wife Lucille.