VINTAGE PLAYBILL: A Raisin in the Sun, 1959 | Playbill
toggle menu

Hansberry became the first African-American woman to write a play produced on Broadway when her landmark drama A Raisin in the Sun opened March 11, 1959, at the Ethel Barrymore Theatre. Sidney Poitier starred as Walter Lee Younger opposite Claudia McNeil as Lena Younger and Ruby Dee as Ruth Younger.

New York Times critic Brooks Atkinson called the play "honest" and applauded the "bold and stirring performance" from the cast: "A Raisin in the Sun has vigor as well as veracity," he wrote, "and is likely to destroy the complacency of any one who sees it."

Raisin went on to play 530 performances and won the 1959 New York Drama Critics' Circle Award for Best Play. The play was later adapted into a 1961 film featuring most of the original Broadway cast.

The drama was last seen on Broadway in a 2004 revival starring Sean Combs, Audra McDonald and Phylicia Rashad.

Read a 1959 Raisin in the Sun Playbill in the Vault. 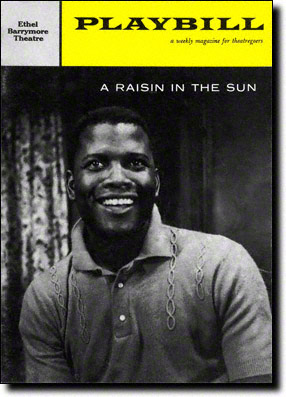