toggle search form
Featured Shows
Related Articles
The Archives PLAYBILL ARCHIVES: Fiddler on the Roof — 1964 (This is one in a series of Playbill On-Line features offering a periodic look back at Broadway and Playbill history, timed to accompany a new production or event of a show from theatre's past. A Broadway revival of Fiddler on the Roof starring Alfred Molina opens Feb. 26 at the Minskoff Theatre. Here's a glimpse at the 1964 Playbill of the original production, with some perspective on the period.)

Alexei Kosygin has succeeded Nikita Khrushchev as premier of USSR. In two days, the Warren Commission will deliver its report to President Lyndon B. Johnson, concluding that assassin Lee Harvey Oswald acted alone in the murder of President John F. Kennedy. Nelson Mandela is sentenced to life imprisonment in South Africa and the cost of a first class postage stamp is 5¢. Welcome back to 1964.

On Broadway, Carol Channing is creating the role she will become best known for in Hello, Dolly!, while Barbra Streisand is recreating the life of Fanny Brice in Funny Girl. Elsewhere on The Great White Way, Jason Robards Jr. stars in Arthur Miller's After The Fall, Richard Burton takes on Hamlet and Liliane Montevecchi performs in Folies Bergére. But, one of the biggest star turns is Zero Mostel — hitherto known for his Tony Award-winning performances in Rhinoceros and A Funny Thing Happened on the Way to the Forum. 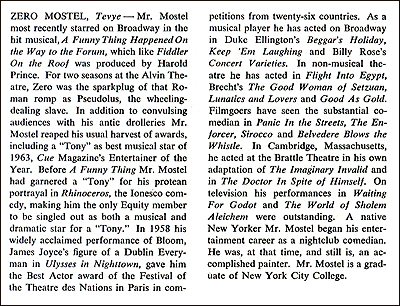 Composer Jerry Bock and lyricist Sheldon Harnick — the songwriting duo behind Pulitzer Prize winner Fiorello! and last season's She Loves Me — team up with librettist Joseph Stein to create a musical based on Sholom Aleichem's stories called Fidder on the Roof. Mostel gets top billing for his role as the aged dairyman (and father of five girls), Tevye, who struggles to honor tradition amid the changing climate of his Russian village Anatevka and beyond. The musical, directed and choreographed by Jerome Robbins, opens Sept. 22 at the Imperial Theatre with a cast that also includes Maria Karnilova, Beatrice ("Bea") Arthur, Austin Pendleton and Bert Convy. 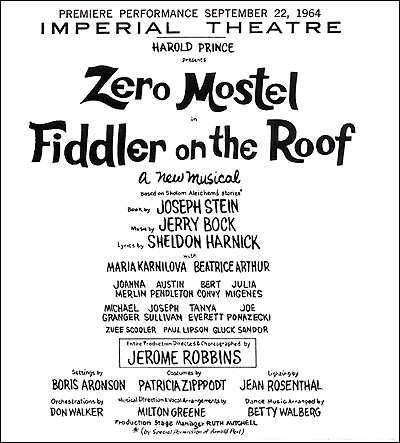 The title page in the Fiddler on the Roof Playbill.

In the Playbill, among advertisements for cars (the "unique new Vista-Roof" of the Oldsmobile Vista-Cruiser and the "changed look" of the Buick Electra 225), airlines, perfumes, the new Diet Pepsi-Cola (informing "If Diet Pepsi is not available in your area, it will be soon!"), cosmetics, cigarettes and plenty of alcohol, are full-pagers for original cast albums of Fiddler on the Roof, What Makes Sammy Run? as well as Funny Girl on vinyl. 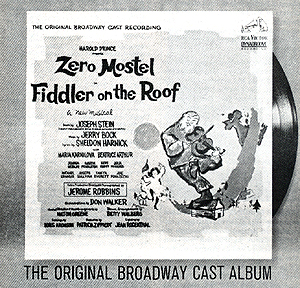 An ad for the cast album of Fiddler on the Roof.

Editorial featured in the Playbill include a New York theatre season round-up, an article about Playbill's 80th birthday party with photos of guests (including Janet Leigh, Hume Cronyn, Richard Burton and Elizabeth Taylor), the signature theatre quiz, and an Al Hirschfeld "unLikely Casting" caricature of Sammy Davis and Robert Preston as the Dromio Twins of The Boys From Syracuse (accompanied by the actors' reactions Davis: "The idea of playing twin-brothers is far-fetched for two reasons. He's older and he's taller."). 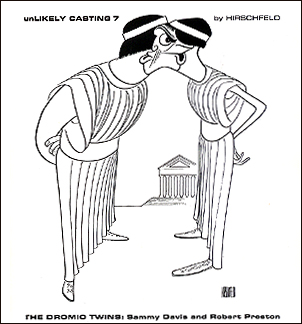 According to theatre historian and Playbill archivist Louis Botto, the "temperamental" and "eccentric" Mostel almost kept the show from its Broadway debut. "On the opening night, they had a terrible time with Zero Mostel because he sat on the curb in front of the Imperial Theatre and wouldn't go in the theatre. Jerome Robbins had to practically drag him in," Botto recalls. The boisterous actor also unknowingly set the improvisational pace for his The Producers successor Nathan Lane. Botto explained "After the show had been running a while, he had been ad-libbing like crazy, which drove the authors up the wall."

The musical would run on Broadway for 3,242 performances (transferring to the Majestic Theatre in 1967 and the Broadway Theatre in 1970) before its closing July 2, 1972. It will in nine Tony Awards including for Best Actor (Mostel), Supporting or Featured Actress (Karnilova), author (Stein), director and choreographer (Robbins), composer (Bock) and lyricist (Harnick), costume designer (Patricia Zipprodt), producer (Harold Prince) and for Best Musical. The show will go on to be made into a 1971 film starring Topol in the Tevye role. Mostel would reclaim the role in a 1976 Broadway revival.