toggle search form
Featured Shows
Related Articles
The Archives PLAYBILL ARCHIVES: La Cage aux Folles — 1983 (This is one in a series of Playbill On-Line features offering a periodic look back at Broadway and Playbill history, timed to accompany a new production or event of a show from theatre's past. A Broadway revival of La Cage aux Folles starring Gary Beach and Daniel Davis opens Dec. 9 at the Marquis Theatre. Here's a glimpse at the 1983 Playbill of the original production, with some perspective on the period.)
By Ernio Hernandez

The Vice President of the United States George Bush serves under President Ronald Reagan. "Risky Business," "Cujo" and "Curse of the Pink Panther" just opened at movie theaters while The Police's "Every Breath You Take" and Bonnie Tyler's "Total Eclipse of the Heart" top the singles charts. The cost of a first-class postage stamp is 20 cents. The year is 1983.

On The Great White Way, holdovers such as 'night, Mother and A Chorus Line play among last season's Best Musical Tony Award winner Cats. Name changes abound as Broadway's Alvin and The Little Theater become the Neil Simon and Helen Hayes Theater, respectively. The new season kicks off in the summer with a revival of Jerry Herman's Mame starring Angela Lansbury (it flops) and a new Herman musical featuring a book by the just-dubbed Best Play Tony winner Harvey Fierstein for Torch Song Trilogy. 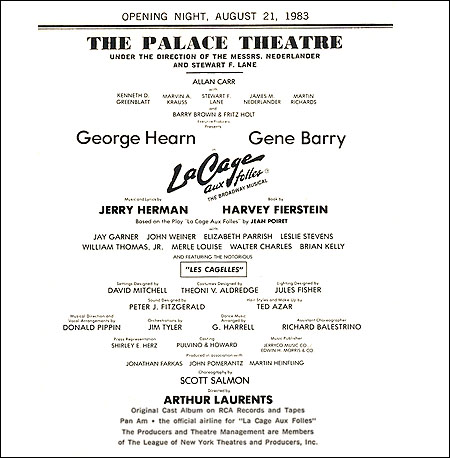 The title page in the La Cage aux Folles Playbill. George Hearn and Gene Barry star in La Cage aux Folles as the gay parents of a young man who is about to be married — to a woman. Arthur Laurents (librettist of West Side Story and Gypsy) directs the musical based on Jean Poiret's play of the same title featuring a score by Jerry Herman. The work, set in St. Tropez, France, opens at the Palace Theatre Aug. 21. 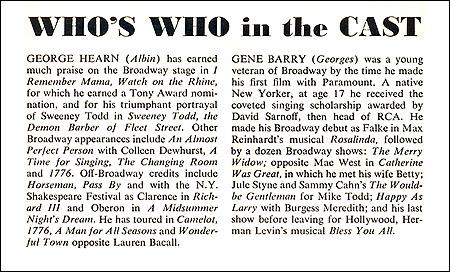 George Hearn and Gene Barry's "Who's Who."

In the Playbill, among advertisements for cars ("the luxury and technology of the present in the woody Town & Country convertible"), airlines, cassettes ("the high fidelity" of Maxell), furs, perfumes, cigarettes and plenty of alcohol are a half-page announcement of the show's original cast recording ("on RCA Records and Cassettes") and "Scenes From" La Cage aux Folles. 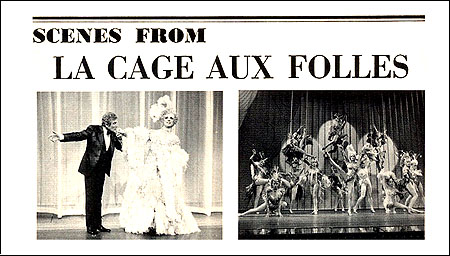 A portion of "Scenes from" La Cage aux Folles.

Editorial features in the Playbill include an interview with stars Hearn and Barry, a "Notes from the League" focus on the job of box-office treasurer, the signature "At This Theatre" and "Dear Playbill" — where theatregoers' questions (like the age of Brighton Beach Memoirs star Matthew Broderick vs. his character's) are answered by (then-) Senior Editor Louis Botto. 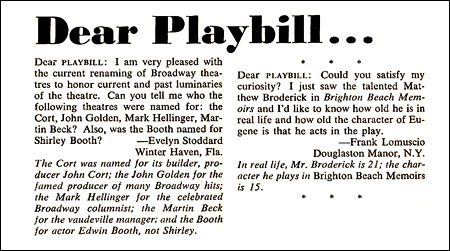 Portion of the "Dear Playbill" feature.

According to Playbill Radio program director Robert Viagas, La Cage aux Folles predated the widespread "Ellen," "Will & Grace" and "Queer Eye"-type recognition. "La Cage opened in a time when gays were just starting to be accepted and homosexuality was just starting to be talked about openly," Viagas said. "A Chorus Line opened the door and then [came] Harvey Fierstein's Torch Song Trilogy. La Cage took it a step further showing to a general audience that gays could actually form stable, long-term relationships and even raise children. The message of La Cage could be phrased as 'Honor your mother — even if she's a man.' That was a revelation at the time, at least in the mass media."

The early-season musical would beat out the rest of the year's competition — including shows like Stephen Sondheim and James Lapine's Sunday in the Park with George, John Kander and Fred Ebb's The Rink and David Shire and Richard Maltby, Jr.'s Baby — taking home the top trio of musical prizes for Best Musical, Best Score and Best Book. Actor Hearn, director Laurents and costume designer Theoni V. Aldredge would bring the show to a topping tally of six awards.