toggle search form
Featured Shows
Related Articles
The Archives PLAYBILL ARCHIVES: Pacific Overtures — 1976 (This is one in a series of Playbill On-Line features offering a periodic look back at Broadway and Playbill history, timed to accompany a new production or event of a show from theatre's past. A Broadway revival of Pacific Overtures starring B.D. Wong opens Dec. 2 at Studio 54. Here's a glimpse at the 1976 Playbill of the original production, with some perspective on the period.)
By Ernio Hernandez

As the United States enters the year of its bicentennial, President Gerald R. Ford sits behind the big desk in the Oval Office. The price of a first class postage stamp is 13¢. Barry Manilow's "I Write the Songs" tops the U.S. chart while a new ABBA single "Mamma Mia" climbs the charts in the U.K. This is 1976. 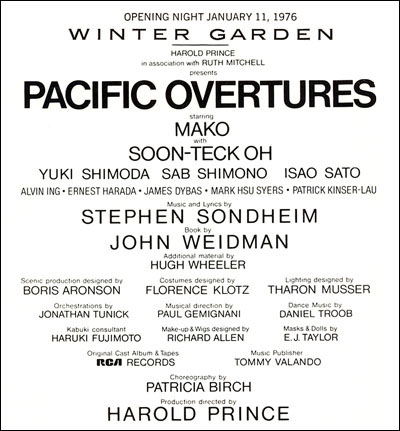 The title page in the Pacific Overtures Playbill. Using an all-Asian cast, Harold Prince directs the Kabuki-inspired staging of Pacific Overtures which follows the opening of Japan from the 1853 expedition of Commodore Matthew Perry. Mako stars as the Reciter in a cast that features Sab Shimono, Isao Sato and Alvin Ing. Patricia Birch choreographs the musical which opens Jan. 11 at the Winter Garden Theatre. 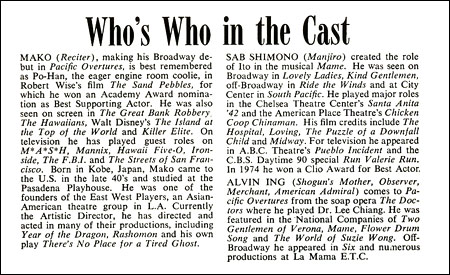 Mako, Sab Shimono and Alvin Ing's "Who's Who."

In the Playbill, among ads for airlines (Delta's "Champagne Coach to Florida," Eastern "The Wings of Man" or United's "Freedom Fare"), Manufacturers Hanover trust company, women's fashions, The Four Seasons After-Theatre dinner, cigarettes and plenty of alcohol are full-pagers for PBS series "The Adams Chronicles" and "Upstairs, Downstairs" as well as for the Original Broadway Cast Recording of Pacific Overtures. 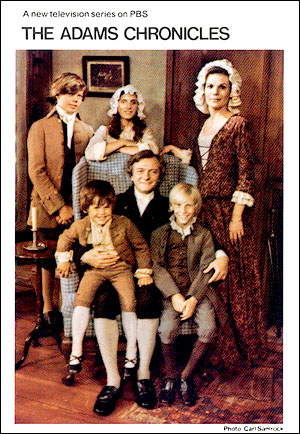 An ad for George Grizzard (center) in "The Adams Chronicles."

Editorial featured in the Playbill included "The Fascination of Hepburn" about the beloved Katharine's return to the stage in A Matter of Gravity, a Clive Barnes look at "Dance on Broadway," an "Offstage Whispers" collection of quotes (Rita Moreno on the matinee ladies: "Those blue-haired ladies have the dirtiest laughs in town."), the signature Who's Who and notes on the production focusing on The Kabuki Theatre and The Japan Expedition. 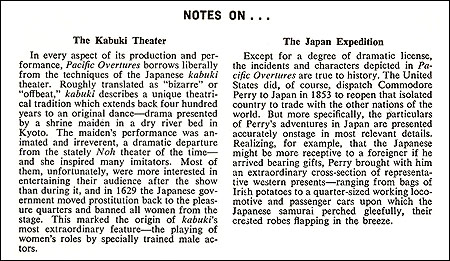 Portion of the "Notes On..." information.

According to theatre historian and Playbill archivist Louis Botto, "The magnificent thing about [Pacific Overtures] was Boris Aronson's sets. They were fantastic, especially the battleship [which] moved from the back to the front of the stage." The installation of a Japanese hanamichi runway recalled the theatre's original trademark bridge which allowed Al Jolson to sing out into the audience.